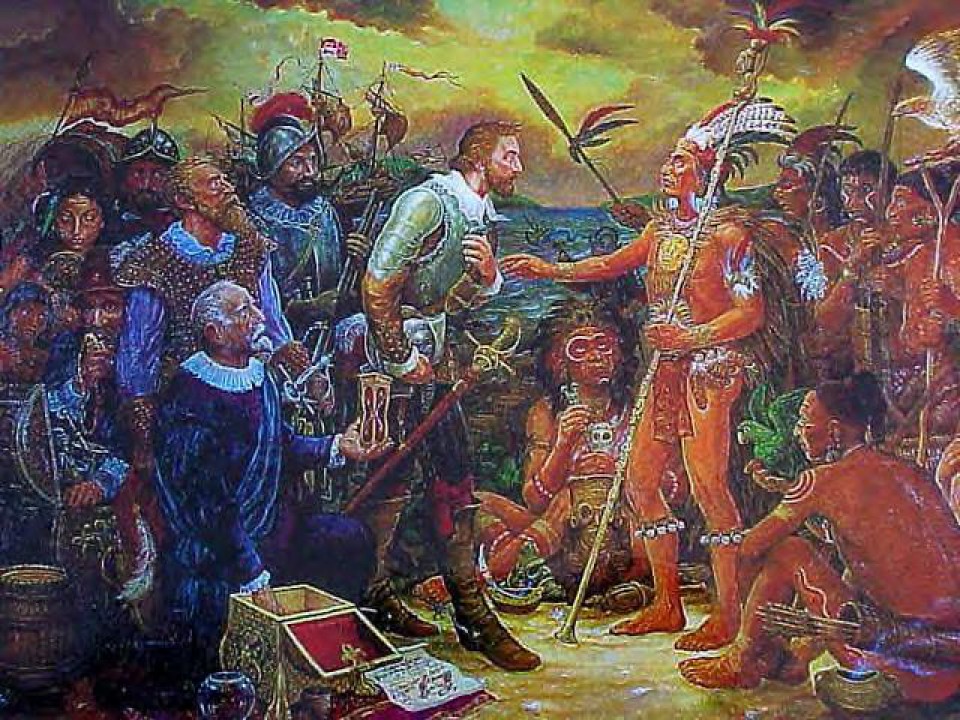 …excerpt of Chapter 1, from “The People’s History of the United States” (abridged)

The history of any country conceals fierce conflicts of interest between conquerors and conquered, masters and slaves, capitalists and workers, dominators and dominated in race and sex.

And in such a world of conflict, a world of victims and executioners, it is the job of thinking people, as Albert Camus suggested, not to be on the side of the executioners.
My point is not to grieve for the victims and denounce the executioners. Those tears, that anger, cast into the past, deplete our moral energy for the present. And the lines are not always clear. The cry of the poor is not always just, but if you don’t listen to it, you will never know what justice is.

1. Columbus, The Indians, and Human Progress

When Columbus and his sailors came ashore, carrying swords, speaking oddly, the Arawaks ran to greet them, brought them food, water, gifts.
These Arawaks of the Bahama Islands were much like indians on the mainland who were remarkable (european observers were to say again and again) for their hospitality, their belief in sharing.
He later wrote in his log:

They willingly traded everything they owned… They were well-built, with good bodies and handsome features… They would make fine servants. with fifty men we could subjugate them all and make them do whatever we want

Like other informed people of his time, Columbus knew the world was round. He had persuaded the king and queen of spain to an expedition to the lands, the wealth, he expected would be on the other side of the Altantic–the indies and asia, gold and spices. Spain was recently unified, one of the new modern nation-states, like France, England, and Portugal. Its population, mostly poor peasants, worked for the nobility, who were 2 percent of the population and owned 95 percent of the land. Like other states of the modern world, Spain sought gold, which was becoming the new mark of wealth, more useful than land because it could buy anything

in return for bringing back gold and spices, they promised Columbus 10 percent of the profits, governorship over new-found lands, and the fame that would go with a new title: Admiral of the ocean sea. He was an expert sailor but he would have never made it to Asia, which was thousands of miles father away than he had calculated, imagining a much smaller world. he would have been doomed by the great expanse of sea. But he was lucky. One-fourth of the way there he came upon an unknown, uncharted land that lay between Europe and Asia–the Americas.

it was early october 1492, and 33 days since he and his crew had left the Canary Islands, off the the coast of Africa. Now they saw branches and sticks floating in the water. They saw flocks of birds. These were signs of land. Then on October 12, a sailor called Rodrigo saw the early morning moon shining on white sands, and cried out. It was an island in the Bahamas. The first man to sight land was supposed to get a yearly pension of 10,000 maravedis for life, but Rodrigo never got it. Columbus claimed he had seen a light the evening before. He got the reward.

So, approaching land, they were met by the Arawak Indians, who swam out to greet them. The Arawaks lived in village communes, had a developed agriculture of corn, yams, cassava. They could spin and weave, but they had no horses or work animals. They had no iron, but they wore tiny gold ornaments in their ears.
This was to have enormous consequences: it led columbus to take some of them aboard his ship as prisoners because he insisted that they guide him to the source of the gold. He then sailed to what is now Cuba, then to Hispaniola (the island which today consists of Haiti and the Dominican Republic). There, bits of visible gold in the rivers, and a gold mask presented to Columbus by a local Indian chief, led to wild visions of gold fields.

On Hispaniola, out of timbers from the Santa Maria, which had run aground, Columbus built a fort, the first European military base in the Western Hemisphere. He called it Navidad (Christmas) and left thirty-nine crew members there, with instructions to find and store the gold. He took more Indian prisoners and put them aboard his two remaining ships. At one part of the island he got into a fight with Indians who refused to trade as many bows and arrows as he and his men wanted. Two were run through with swords and bled to death. Then the Nina and the Pinta set sail for the Azores and Spain. When the weather turned cold, the Indian prisoners began to die.

Because of Columbus’s exaggerated report and promises, his second expedition was given seventeen ships and more than twelve hundred men. The aim was clear: slaves and gold. They went from island to island in the Caribbean, taking Indians as captives. But as word spread of the Europeans’ intent they found more and more empty villages. On Haiti, they found that the sailors left behind at Fort Navidad had been killed in a battle with the Indians, after they had roamed the island in gangs looking for gold, talking women and children as slaves for sex and labor.

Now, from his base on Haiti, Columbus sent expedition after expedition into the interior. They found no gold fields but had to fill up the ships returning to Spain with some kind of dividend. In the year 1495, they went on a great slave raid, rounded up fifteen hundred Arawak men, women, and children, put them in pens guarded by Spaniards and dogs, then picked the five hundred best specimens to load onto ships. Of those five hundred, two hundred died en route. The rest arrived alive in Spain and were put up for sale by the archdeacon of the town.

On Haiti, where Columbus and his men imagined huge gold fields to exist, they ordered all persons fourteen years or older to collect a certain quantity of gold every three months. When they brought it, they were given copper tokens to hang around their necks. Indians found without a copper token had their hands cut off and bled to death. The Indians had been given an impossible task. The only gold around was bits of dust garnered from the streams. So they fled, were hunted down with dogs, and were killed.

When the Spaniards took prisoners they hanged them or burned them to death. Among the Arawaks, mass suicide began, with cassava poison. Infants were killed to save them from the Spaniards. In two years, through murder, mutilation, or suicide, half of the 250,000 Indians on Haiti were dead.

When it became clear that there was no gold left, the Indians were taken as slave labor on huge estates, known later as encomiendas. They were worked at a ferocious pace, and died by the thousands. By the year 1515, there were perhaps fifty thousand Indians left. By 1550, there were five hundred. A report of the year 1650 shows none of the original Arawaks or their descendants left on the island.

The chief source–and, on many matters the only source–of information about what happened on the islands after Columbus came is Bartolomé de las Casas, who, as a young priest, participated in the conquest of Cuba. For a time owned a plantation on which Indian slaves worked, but he gave that up and became a vehement critic of Spanish cruelty. Las Casas transcribed Columbus’s journal and, in his fifties, began a multivolume History of the Indies. In it, he describes the Indians.

Women in Indian society were treated so well as to startle the Spaniards. Las Casas describes sex relations:

Marriage laws are non existent: men and women alike choose their mates and leave them as they please, without offense, jealousy or anger. They multiply in great abundance; pregnant women work to the last minute and give birth almost painlessly; up the next day, they bathe in the river and are as clean and healthy as before giving birth…

…They prize bird feathers of various colors, beads made of fishbones, and green and white stones with which they adorn their ears and lips, but they put no value on gold and other precious things. They lack all manner of commerce, neither buying nor selling, and rely exclusively on their natural environment for maintenance. They are extremely generous with their possessions and by the same token covet the possessions of their friends and expect the same degree of liberality…

In Book Two of the History of the indies, Las Casas tells about the treatment of the indians by the spaniards. it is a unique account and deserves to be quoted at length:

Las Casas tells how the Spaniards “grew more conceited every day” and after a while refused to walk any distance. They “rode the backs of Indians if they were in a hurry”. Total control led to total cruelty.
The Spaniards “thought nothing of knifing Indians by tens and twenties and of cutting slices off them to test the sharpness of their blades.” A story tells how “two of these so-called Christians met two Indian boys one day, each carrying a parrot; they took the parrots and for fun beheaded the boys.

The Indians attempts to defend themselves failed. And when they ran off into the hills they were found and killed. So it was reported “they suffered and died in the mines and other labors in desperate silence, knowing not a soul in the world to whom they could turn for help.

Thus husbands and wives were together only once every eight or ten months and when they met they were so exhausted and depressed on both sides… they ceased to procreate. As for the newly born, they died early because their mothers, overworked and famished, had no milk to nurse them, and for this reason, while I was in Cuba, 7000 children died in three months.
Some mothers even drowned their babies from sheer desperation… In this way, husbands died in the mines, wives died at work, and children died from lack of milk… and in a short time this land which was so great, so powerful and fertile… was depopulated… My eyes have seen these acts so foreign to human nature, and now I tremble as I write…


Error: API requests are being delayed for this account. New posts will not be retrieved.

Make sure this account has posts available on instagram.com.