How Do We Democratize Our Media 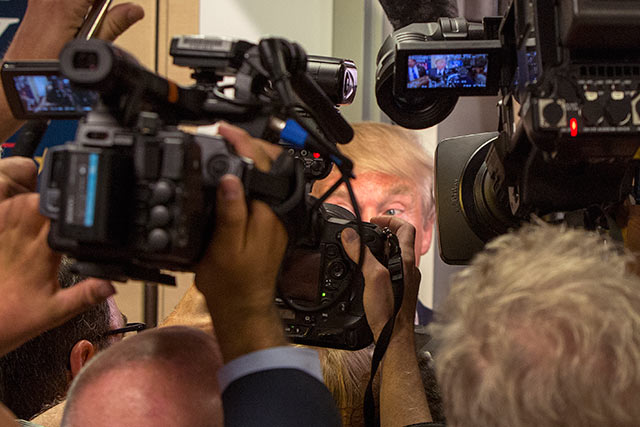 There’s a huge debate going on right now about the role of the media in US politics. And two of the main questions are: “How much are the media to blame for fueling the rise of Donald Trump?” And, “What’s the real relationship between Trump and the media?”

Nicholas Kristof recently gave his opinion on the matter in the The New York Times. He explains that, “Those of us in the news media have sometimes blamed Donald Trump’s rise on the Republican Party’s toxic manipulation of racial resentments over the years. But we should also acknowledge another force that empowered Trump: Us.”

It’s really not an either/or proposition though; those two things go hand in hand.

The prevalence of right-wing hate rhetoric and the rise of Trump make it clear why, now more than ever, we need to reinstate the Fairness Doctrine and democratize our media.

Between 1949 and 1987, the Fairness Doctrine was a longstanding policy of the Federal Communications Commission (FCC) that required broadcasters to give air time to controversial issues of public importance, and to do so in a fair manner without editorial input from advertisers.

But after the FCC stopped the Fairness Doctrine under President Ronald Reagan in 1987, broadcast corporations stopped having to worry about broadcasting in the public interest. Because the main way that stations “programmed in the public interest” was by producing news — real, actual, non-infotainment news — and once Reagan lifted that requirement, the news divisions of the various networks came under the sway of ratings and profits.

News was no longer the cost of keeping your broadcast license; instead, it became an opportunity to make more money with increasingly shallow and salacious reporting.

Perhaps coincidentally, just a few months after the FCC did away with the Fairness Doctrine, Rush Limbaugh launched his show, and in the years following, conservative-owned corporations put commentators like Sean Hannity and Michael Savage on stations nationwide, so that listeners could tune in to right-wing hate radio from pretty much anywhere in the country at any time of the day or night.

This was given a huge boost by the Telecommunications Act of 1996, as well as a few other smaller laws and changes in FCC policy, that let a small handful of corporations buy up all the radio stations, TV stations and newspapers in communities from coast to coast. Many of those radio stations were then programmed with hyper-corporate-friendly right-wing hate radio.

It’s been a big factor in the rightward-shift of our country over the past 30 years. And without the Fairness Doctrine and ownership rules in place, other broadcasters started to be more concerned about their corporate interests — their bottom lines — instead of the public interest.

Donald Trump’s candidacy has forced every media outlet to choose whether to serve the public interest by challenging his outlandish and dangerous rhetoric, or to serve their corporate interest by simply turning on the cameras and letting the film roll every time Trump does or says something outlandish. And they’re choosing their corporate interests.

This isn’t just speculation that the media is making this choice — it’s exactly what CBS President Les Moonves recently told a group of investors.

That explains why Andrew Tyndall reported last year that Donald Trump got 234 minutes of free coverage on the major nightly network news shows in 2015, as opposed to Bernie Sanders, who got less than 10 minutes of coverage from those shows over the same period.

And it explains why Trump has received nearly $2 billion worth of free media during this campaign cycle, as opposed to Democratic front-runner Hillary Clinton, who’s gotten less than half of that.

Les Moonves said it: The corporate media simply doesn’t care about the well-being of the United States.

And corporate media don’t really care about covering real issues that impact the public, like climate change or net neutrality, let alone covering those issues honestly or objectively. The corporate media only care about the bottom line, about ratings and about getting more money from their advertisers.

The fact is, the media didn’t really create Trump.

The media have just been waiting for a candidate like Trump to come along ever since Reagan killed the Fairness Doctrine in 1987, and then Bill Clinton further cemented media consolidation with the Telecommunications Act of 1996.

In a speech at Syracuse University, President Obama rightfully pushed back against the profit-centric mentality of the media and the attitudes of network executives like Les Moonves.

Without the Fairness Doctrine and a roll-back of the ownership rules in the Telecommunications Act of 1996, media companies have no reason to act in the public interest, and no reason to cover inform people about issues of public importance like climate change, the Trans-Pacific Partnership, net neutrality or runaway income inequality.

There’s a reason the framers of the Constitution wrote the press into the First Amendment: Democracy can’t thrive without an informed electorate.

It’s time to democratize the media, and that means it’s time to bring back the Fairness Doctrine and to reinstate media ownership rules so a small handful of wealthy right-wingers no longer dictate our daily media diet.