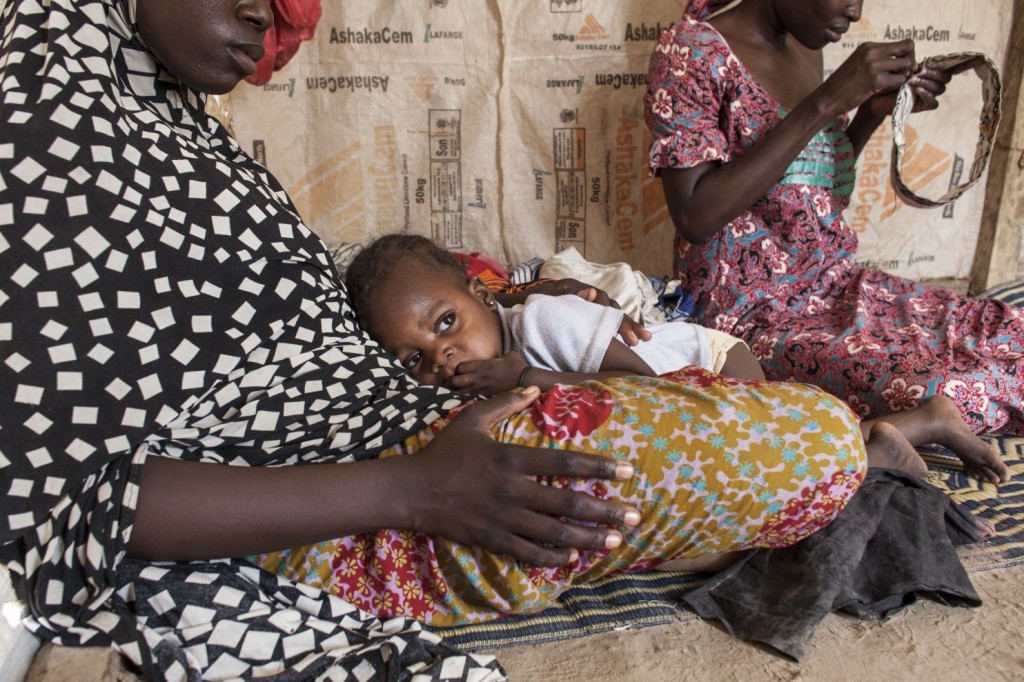 MAIDUGURI, Nigeria — For months, they were kept in tiny thatched huts in the middle of the forest, waiting with dread each evening for their rapists to return. During the almost intolerable violence, the young women’s minds drifted to escape or death. The victims were as young as 8.

At the heart of Boko Haram’s self-proclaimed caliphate in northeastern Nigeria was a savage campaign of rape and sexual slavery that has only recently been uncovered. Thousands of girls and women were held against their will, subject to forced marriages and relentless indoctrination. Those who resisted were often shot.

Now, many of the women are suddenly free — rescued in a series of Nigerian military operations over the past year that dislodged the extremist Islamist group from most of the territory it controlled. But there have been few joyous family reunions for the victims.

Most of the surviving women no longer have homes. Their cities were burned to the ground. The military has quietly deposited them in displacement camps or abandoned buildings, where they are monitored by armed men suspicious of their loyalties. They are still labeled “Boko Haram wives.”

Few could have imagined such an outcome two years ago, when 276 schoolgirls were kidnapped by Boko Haram and the world responded with the Bring Back Our Girls campaign. While most of those schoolgirls from Chibok are still missing, many people assumed the other kidnapped women would be warmly welcomed back.

Instead, they are shunned.

For seven months, Hamsatu, now 25, and Halima, 15, were among Boko Haram’s sex slaves, raped almost every day by the same unit of fighters in the remote Sambisa Forest. Now, they live in a narrow, white tent in a displacement camp, with empty cement bags sewn together to create a curtain. The women spoke on the condition that their full names were not used in order to freely describe their experiences.

When Halima leaves the tent to get food for the two of them, the other people living in the camp scowl at her or cautiously move away.

“You’re the one who was married to Boko Haram,” one older woman spat at her recently.

“We can’t trust any of them,” said one guard.

Authorities say there are good reasons for their wariness. Last year, 39 of 89 Boko Haram suicide bombings were carried out by women, according to UNICEF. Twenty-one of those female attackers were under the age of 18, many of them girls apparently abducted from villages and cities and converted into assassins. Since January, female attackers have killed hundreds of people across northeastern Nigeria, in mosques, markets and even displacement camps.

Either way, the job of reintegrating the displaced has become vastly more complicated for Ni­ger­ian authorities.

And for survivors trying to move on from a horrific chapter of their lives, there is now a new agony.

“There is no trust here,” said Hamsatu, crouching in her tent and wearing the same pink, flowery dress she had on when she was kidnapped 18 months ago. In her arms, she held the baby of her captor.

‘I don’t know if he’s alive’
It was September 2014 when Boko Haram fighters took over Hamsatu’s and Halima’s home city of Bama, near the Cameroonian border. Many of the 350,000 residents managed to flee. But the fighters immediately started killing the male civilians who couldn’t escape. Some were shot in their homes. Others were beheaded and thrown in mass graves.

With a group of about 25 other women, Hamsatu and Halima say, they were moved by the militants from home to home and then forced to travel on foot and on the backs of motorcycles to the Sambisa Forest, where Boko Haram had set up camps for its sex slaves.

The women were each assigned to a sliver of a hut, barely big enough to lie down. Hamsatu said that days later, one fighter, whose name she never learned, entered the hut and said a prayer in what sounded to her like Arabic.

Now they were married, he told her. She thought of her real husband, who had been missing since the day Boko Haram stormed Bama.

From then on, the days were uniformly violent. Different men would come into her hut each evening, in addition to the one who called himself her “husband,” Hamsatu said. Sometimes they screamed at her for not praying enough. “Even the Chibok girls are better Muslims than you,” a man yelled at her once.

Sometimes the men said nothing at all, tearing off her headscarf and raping her on the floor of the hut, she recalled. After about two months, she became pregnant.

Publicly, Boko Haram members decry the tyranny of Nigeria’s federal government, which is mostly Christian in a nation where Muslims, nearly half of the population, have long complained about being marginalized. The militants rail against secular education and demand strict Islamic observance. The group has declared allegiance to the Islamic State.

But to their prisoners, the fighters’ campaign didn’t seem driven by ideology so much as a wild appetite for sex and violence. It would take the rest of the world some time to learn about Boko Haram’s institutionalized sexual abuse. Rape wasn’t just a byproduct of the chaos of war in Nigeria, U.N. Secretary General Ban Ki-moon would say in 2015. It was a calculated “tactic of terror.”

“These people have a certain spiritual conviction that any child they father will grow to inherit their ideology,” Kashim Shettima, the governor of Borno state — where Bama is located — told reporters last year.

At night, Hamsatu heard helicopters and gunshots. Several times, she attempted to escape, but she was caught and returned by guards. After a while, the pregnancy slowed her and she stopped trying.

When the Nigerian military came, it hardly felt to the women like a rescue operation. Soldiers burned the huts while women were still inside and shot wildly at everyone, they said. Several women were killed or disappeared during the operation, according to accounts from several former captives. Halima is now raising a 3-year-old orphan whose mother vanished during the rescue operation.

The women were loaded in pickup trucks and dumped on a desert road about 50 miles away, they said. Military interrogators arrived.

The women were searched for weapons. After months of being held by one of the world’s deadliest terror groups, the women realized: They were now suspects.

Fearing the ‘liberated’
“Sambisa woman” — that’s what they called Hamsatu and Halima when the women arrived at the Dalori displacement camp on the outskirts of the city of Maiduguri in April of last year. It was the name of the forest where they had been enslaved.

Hamsatu and Halima were taken to a tent they shared with two other women and the 3-year-old orphan — all of whom had been “liberated” from Boko Haram, as the military said. The women who had been forcibly married to fighters were kept apart from other people displaced by the war.

Unlike most of the world’s refugee or displacement camps, which are run by the United Nations and international aid groups, the camps where Boko Haram’s victims live are administered by the Nigerian military. Outside Dalori, an army captain stands by the front gate. Visitors are patted down. A poster of high-level Boko Haram suspects hangs on the perimeter wall of the camp. Aid workers need military permission to enter the camps.

Some women who lived under Boko Haram are occasionally hauled off to a military base for questioning, and then returned.

“The fear is that they’ve been converted to Boko Haram’s ideology,” said Mohammed Ali Guja, the chairman of the city of Bama. “They are now a different person.”

The country’s displaced population has ballooned. As of March, there were 2.6 million internally displaced people, or IDPs, in northeastern Nigeria, according to the International Organization for Migration. Even local relief workers worry that the women they have been sent to help might be concealing loyalties to their Boko Haram abductors.

“The simple truth is they pose a serious threat to the general public,” said Ann Darman, of the Gender Equality, Peace and Development Center, a Nigerian aid group that often works with the United Nations.

Last year, just as the liberated women were pouring into displacement camps and local communities, there was a surge in female suicide bombers. In June, one killed 20 people at a bus station in Maiduguri. A day later, two bombers killed 30 at a market in the city. In July, two more killed 13 people near a military checkpoint. In October, four girls and a boy targeted a mosque, killing 15. Witnesses said some of the attackers appeared to be no older than 9.

“We think they have more or less brainwashed these children,” said Maj. Gen. Lucky Irabor, the top Ni­ger­ian military official in the northeast. “They have become useful tools” for Boko Haram.

Amid the attacks, Hamsatu gave birth last June to the child of her rapist in the camp’s rundown clinic.

Her daughter made her an even greater target of scorn. In many Nigerian communities, people believe that the father’s blood courses through the veins of his child, “so that at some point in the future they will be likely to turn against their own community,” said Rachel Harvey, UNICEF’s head of child protection in Nigeria.

A subtle shunning
One morning in mid-March, the women in the narrow white tent woke up on thin mats, each with one pair of clothes to wear. At 10, Halima walked across the scorching-hot sand to get breakfast: rice and beans donated by Nigeria’s government aid agency.

At the food-collection point, sometimes people inch away from her, she said, as if it would be dangerous to get too close.

It didn’t seem to matter that she had been vetted by the Nigerian military. Or that she actually never wanted children and was now struggling to raise a 3-year-old and blamed Boko Haram each time the girl cried or soiled herself or asked where her real mom was.

Just a few weeks before, three female suicide bombers had blown themselves up in the nearby village of Dalori, part of an attack that killed 86 people, including children. The suspicion of Boko Haram’s victims only grew. In late March, a Nigerian girl was apprehended with explosives strapped to her body in Cameroon, near the Ni­ger­ian border. She set off a brief scandal when she said she was one of the Chibok girls, but Nigerian officials denied her claim.

Some worry that in a part of Nigeria that was once torn apart by a homegrown insurgency, another cleavage is forming, this one in the wake of war.

“Subjecting [the victims] to further discrimination and ill treatment due to their status as victims of Boko Haram violence is certain to undermine the entire response to the situation in the northeast,” said Martin Ejidike, a prominent human rights adviser to the United Nations in Nigeria.

There are few signs the situation will improve. Many international aid organizations won’t work in the north because of the continued insecurity.

The government had opened a deradicalization center to help re-integrate the former victims, but it closed late last year, after admitting only 311 people. Officials at the national security adviser’s office did not return phone calls seeking an explanation for the closure.

In the camps, some of the women victimized by Boko Haram down bottles of homemade cough syrup to get deliriously high alone.

Once a week, Halima and Hamsatu attend group therapy sessions in a tent that says “Safe Place for Women and Girls.”

There they are known as “the sisters” because of how close they’ve become. They gather in a circle on the floor with about a dozen other women. The counselor repeats a few lines during each meeting. Hamsatu and Halima wait quietly for them, wishing they were true.

“What has gone has gone.”

“You are secure now.”

By Kevin Sieff for The Washington Post, read the orignal HERE