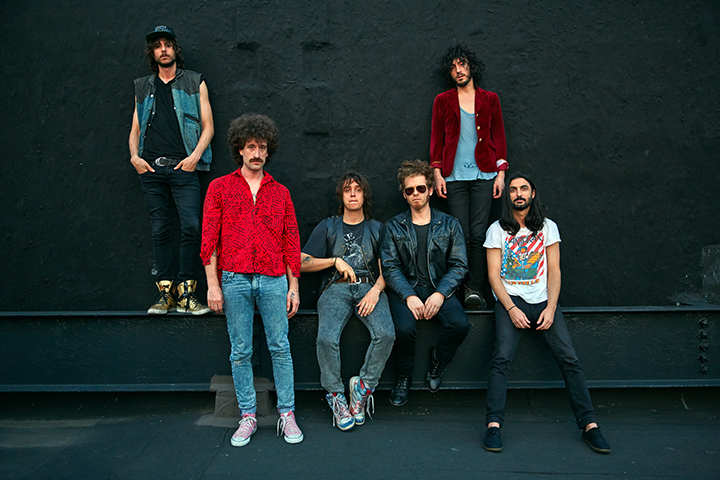 Julian was recently interviewed by Paul Lester for The Guardian. Chegg out the full interview below:

PL: Your new album is called Tyranny. Is that you, the tyrant? Or are you talking about tyrannies in the world?
JC: Ha, b). Even though a) might be true. I hope not.

PL: Is that you, the pop dictator, bossing everyone around?
JC: I was actually tapping into the notion of profits at the expense of humanity that I see everywhere. The general human struggle. The point of the record is to try and illustrate the total illusion that we’re somehow beyond that sort of thing, in this so-called era of freedom and justice.

PL: You emerged with the Strokes’ Is This It just before 9/11. Is this an even tougher time?
JC: Well, it’s hard to think of anything worse [than now], even though personally I would probably say no. But we try to get awareness through art. It doesn’t necessarily effect change immediately, but it trickles into the subconscious and the next generation benefits.

PL: M.utually A.ssured D.estruction, Off to War and Take Me in Your Army are all tracks on your new album. What’s on your mind, Julian?
JC: There’s so many conflicts. It’s the more visceral, angry side of “Wake the ‘f’ up!”. We live in a society where there is freedom of speech, but the truth is they can shut you down like in any dictatorship. If everybody understood what was going on, our problems wouldn’t be complicated. But we live in an era where everyone is trying to keep everyone in the dark and dumb and not really aware of what’s going on. That’s the main issue.

PL: You’ve called Tyranny a protest record …
JC: I guess it’s kind of a protest record. It feels like one to me. It’s more to do with morality than politics. We have the sense that we’ve moved on from the system where the centres of wealth arbitrarily decide what is law and what wars we fight, etc. But I really don’t think that we are removed from that. The [US democratic] system is very similar to a monarchy.

PL: In 2006, you told New York magazine, “I feel like I’ve given up a lot of my fantasies … I just want to do things differently, and to a lot of people that’s annoying. I like weird stuff.” Is Tyranny you doing weird stuff?
JC: Um, no. If anything I want to make edgier, interesting stuff mainstream. I’m not trying to be weird, I’m trying to make cool things, that are usually underground, popular. There are parallels between quality in music, and truth in politics: there’s always a time-delay where, years later, people acknowledge what was kept buried. A lot of what I do is to try and make cool things popular in their own time. But I’m not trying to be new or different. It’s just the same as ever – creative ideas come in my mind and I just execute them.

PL:So this wasn’t your deliberate attempt to do a Metal Machine Music?
JC: God, no.

PL: Is it your Yeezus, or your Tilt – a bloodyminded exercise in difference? Or do you think Kanye and Scott Walker were, in their minds, creating accessible art on those records?
JC: No, I think Metal Machine Music was the heroin speaking. If anything I was trying to make it [Tyranny] catchy and interesting. We may have travelled too far in the future for some minds, but to me it’s totally to help train mainstream ears.

PL: Have you been playing the tracks at home? What does your son make of Nintendo Blood?
JC: Oh, he isn’t really aware of what I do.

PL: Do you listen to much pop? Meghan Trainor, say?
JC: No, not really.

PL: What were you listening to in the build-up to this album?
JC: I did joke that when we were making Human Sadness, we were listening to November Rain.

PL: Were you trying to make a point by releasing that as a single?
JC: I like long songs. I’ve been thinking about doing one for a while. I just thought it was a cool idea to put it out as a single. I remember Arcade Fire had a song, Here Comes the Night Time, and it was about 10 minutes long and I thought it was so cool. I thought if they’d put it out as their first single it would have been like a modern Come On Eileen! Songs like Bohemian Rhapsody, November Rain, The End, Paranoid Android those were all singles, and all legendary songs. I’m not trying to confound people or trying to be weird. I’m trying to do something inspiring and cool.

PL:Human Sadness sounds like a heartbreak pop crooner trapped in hell.
JC: It was very intense to work on. I’ve never worked on a song where the people were close to tears.

PL: Really?
JC: I wasn’t quite crying, but it was really intense. It’s like being on the operating table – you’re working on making it emotional. But this was a rare time when I felt swallowed up by it.

PL: Were you channelling your inner Cobain on Where No Eagles Fly?
JC: I grew up with Pearl Jam and Nirvana, but if you can hear any screaming on the album it probably comes more from 80s hardcore like Big Black or Black Flag.

PL: Is it true that Quincy Jones was in the frame to produce the Strokes’ second album Room on Fire?
JC: That I’ve never heard.

PL: How about Pharrell – wasn’t he lined up to produce the fourth album, Angles?
JC: I had worked with him on a song and he had talked to me about [producing Angles], but it never happened. It was something I was intrigued … on? I’m not sure what the conjunction is.

PL: “By”. Would Angles have been better if Pharrell had produced it?
JC: I’m not sure. I can’t remember exactly how it played out. Like I said, I met him and he talked to the band but I’m not sure if they were into it.

PL: Is This It was voted No 8 in Rolling Stone’s list of 100 greatest debut albums, up there with the Velvet Underground & Nico, Ramones, Marquee Moon and the rest. Deserved?
JC: Man, I don’t think that way. If anything I try to make myself think: “No, it’s not.” In order to get better you’ve got to think you’re not quite there.

PL: Are you aware of the downside of praise? You’ve talked before about the negative effect it must have had on Michael Jackson (6) …
JC: Oh, I think it affects a lot of people. I’m more motivated by doing things of quality while always realising there are people out there who are better than me.

PL: Do you think everyone believes there are people out there who are better than them? Even Bob Dylan?
JC: Well, probably at some point in the 80s he did.

PL: Who do you think is least likely to believe that anyone is better than them?
JC: As soon as you say that, you start to go downhill. No one should ever say that, I don’t think. The quality of your art gets affected.

PL: You’re seen as the epitome of New York cool. Who’s most likely in your life to puncture that cool? Your wife? Friends?
JC: I don’t know – a lot of people! I don’t even know what that [cool] means. If it means “dresses fashionably”, that’s silly. If it means “good person”, that’s a nice compliment. I think someone’s cool if they’re a genuine, compassionate person.

PL: Have your encounters proved Dylan’s dictum that you should never meet your heroes?
JC: Well, it’s difficult, because if you just go, “I love you, I love you,” it’s kind of a turn-off. That’s not how you pick up chicks, you know what I mean? You have to play it cool. But you can’t play it too cool. You have to be warm and respectful. It’s a dance. I mean, I’m talking theoretically – I fail at this every time. I totally put my foot in my mouth and make a fool of myself in front of anyone I have respect for. If you hang in there long enough, it’s OK to be yourself, to see if you can connect. But if you only have, like, 20 seconds to audition in front of your heroes, you’re probably likely – as I have – to make a fool of yourself.

PL: I presume you were joking when you said recently that the reason you left New York was there were too many “white people having brunch” at the weekend
JC: Oh, man. I mean, it’s so true, but I shouldn’t have said that in an interview. The journalist didn’t quite get it.

PL: Have you just moved out?
JC: Yeah, but I’m still nearby, and I come in all the time. I’ve always wanted to live right outside and drive in, so I’m in the city a couple of times a week.

PL: Do you miss the dirty, seedy, Travis Bickle version of New York?
JC: Sure. There’s definitely a sweet spot, a middle ground, where it’s not, like, dangerous. That middle-ground neighbourhood has been eviscerated a little bit, I think. I have nothing against gentrification, by the way. It’s fine to have banks on every corner as far as the eye can see. It’s more the indirect horror [laughs] that comes from that. That’s the issue. On a personal level, the cool spots are definitely fewer and farther between. New York’s still cool, though.

PL: Are you more Lou Reed or Sam Cooke?
JC: Oh, that’s a toughie. Obviously Sam Cooke had a much better voice. I would have to say Lou Reed. In fact, I would say Bob Marley above both of them, just because of the body of poetry and writing. I think I’ve always been subtle in my songs. That’s why I’ve been working on lyrics, trying to improve them. I’ve been getting a little more specific. I don’t know if anyone cares, but as I hopefully get better I can get better at expressing myself. I think I’m going to be less misunderstood as I go out and do more interviews.

PL: Do people not get you?
JC: It’s complicated. I’m just working at it, I guess. Trying to figure it all out. I don’t know – I don’t really care. That’s your job.